We often hear talk in the market about losses from large catastrophes and their related reinsurance costs, but Insurers also face increasing pressure from non-catastrophic losses which can have a significant impact on premiums.

The reality is that seemingly minor events can be major reasons behind increasing costs.

This is particularly evident when we look at losses in commercial property. Disturbingly, it is estimated that across the industry over 30% of losses are caused by arson.

These events can involve a range of people and motives, from disaffected staff members to competitors – even pyromaniacs. Arson for profit can lead to deliberately lit fires with perpetrators seeking to defraud insurers. Even thrill-seeking children can be the cause of significant fires.

“We are working closely with fraud specialists to determine trends and help better understand this,” said Anthony Pagano, Head of Commercial Intermediaries at Vero.

“Our own Vero team of risk engineers are experts at identifying risks and putting plans in place to minimise their impact. They can be very proactive in addressing the causes of these large losses.”

A recent example includes a fire in a West Australian hotel which the licensee was found to have arranged. It resulted in a $1.5 million claim. Pleading guilty to fraud at trial, the licensee is now serving a lengthy jail sentence. 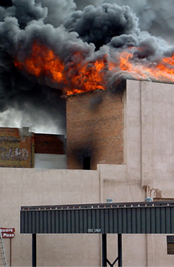 Other causes for major non-cat losses include machinery breakdowns, water and storm damage, fire and malicious damage. Business interruption insurance can play a large part in each of these instances with policy holders making significant claims for loss of revenue and other costs sustained after such events – sometimes for a protracted period.

To help brokers better understand the impact of these losses, Vero used data from over 40,000 claims to create the Risk Register tool. It demonstrates typical claims and brackets them by industry type and insurance category.

For example, the Risk Register tool shows that in the construction industry, theft is the greatest contributor to losses, responsible for around 22% of claims, while water damage through bursting or leaking pipes accounts for less than 5% of claims.

Contrast this with the retail industry where claims for accidental loss or damage are the most prevalent at 13%, with electronic breakdown and ‘slip, trip and fall’ the least common with just 4% of losses each.

Is the policyholder the building owner?

Another source of grief for all insurers is that it’s believed around 15% of people insuring commercial buildings are not the building owners. This can result in issues when it comes to a claim. Commonly the issue of a tenant insuring the property raises an issue around the policy holder’s interests to insure the premises for its full value.

Robert Leach, National Manager Liability & Major Loss Claims at Vero, said most larger businesses have ISR policies that provide cover for material damage and other losses associated with their business being unable to operate because of an insured event, and these additional coverages can significantly impact the overall cost of claims.

“With a large fire claim, it is important to focus on getting the business running again as soon as possible. Having a repair strategy that emphasises both the quality and speed of repair is a key element in mitigating the costs of larger claims,” Robert said.

Of further concern is the escalation in claims costs for losses associated with expanded polystyrene (EPS) sandwich panel. Two large EPS events in 2016 and 2017 have ramped up annual losses from $30 million to $80 million per annum. This versatile construction material is used in multiple applications across the construction, food and beverage, packaging and insulation industries.

Amongst other risks facing commercial insurers is the build-up of hazardous and combustible materials at large recycling facilities. As these stockpiles continue to grow, so do the risks.

If the above losses continue to increase, it will put pressure on the Industry’s position on cover and price. To help combat this, insurers, brokers and customers are working together to proactively mitigate potential risks.

“Our risk engineering capabilities are widely known and respected and their services can significantly defuse major accidents. For example, Vero risk engineering services were employed during the design phase of automatic sprinkler protection improvements at a major food manufacturer in Tasmania,” said Anthony Pagano.

“The client implemented them and this made the difference when an oil fryer duct fire was successfully controlled. This kept a potential $100 million plus claim to a below deductible event.”